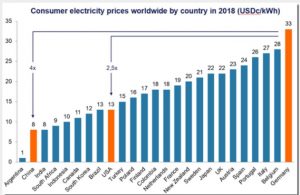 The prospect of a 100% renewable energy future is 100% pure, unadulterated myth. Placard waving teens fretting about the weather in 30 years’ time might demand it, but logic, physics, meteorology and economics will forever conspire against an all wind and sun powered future. And the idea that a transition to wind and solar is ‘inevitable’ is complete and utter nonsense. The chart above reveals the costs of living in a country powering itself, or attempting to, on the delusions of electrons from sunshine and breezes.  Even Greta The Green’s rage can only power herself and her parent’s manipulations.  Read the following report to grasp the simple fact that powering the future requires grasping some very simple concepts.