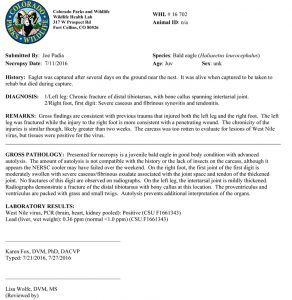 Necropsy Report Inconclusive: As you see, the necropsy report from the Colorado Parks & Wildlife Animal Health Laboratory details several findings regarding the body of E4. Unfortunately, it seems that the refrigerator holding the body failed shortly after the eagle was placed there on July 9, and by the time the issue was discovered, some fairly significant decomposition (“autolysis”) had taken place. This seems to have prevented the pathologist from a conducting a more thorough analysis of the eagle’s organs, including the liver, spleen, brain, heart, etc. However, the brain, heart and kidney did test positive for West Nile virus.

Secondarily to the presence of West Nile virus, is the description of the injury to the eagle’s right rear toe, the “hallux” toe, also described as the first digit. The cause of the penetrating wound is still unknown and we do know from when the eagle was first rescued from the water on July 6, that the wound was not present at that point. What caused the wound, and whether it was a factor in the eagle’s death is unknown at this point. We are hoping to speak with Dr. Karen Fox in the coming days, as we have several questions about her findings and thus far do not see a definitive cause of death listed.