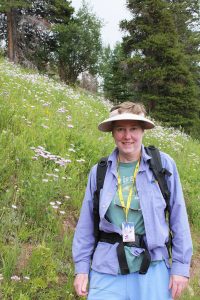 Sharon and I first met at one of our special programs for Colorado’s Volunteer Raptor Monitors at their annual meeting at Colorado Parks & Wildlife headquarters. Sharon became a member of REF after that encounter and attended our raptor ID courses. She participated in many of our raptor photos safaris and displayed an excellent talent for photography. It was during one of these day-long safaris that I learned Sharon was a medical doctor living with a debilitating autoimmune disease. As one of my family also has an autoimmune disease, we discovered another common bond between us, besides the birds that she was so enchanted with.  Even though it was difficult for her to be out in the hotter part of the day, Sharon never lost her zest for seeing the birds up close and enjoying the outdoors. We often talked on the phone about her treatments and how she was doing. As her conditioned worsened, our contacts were relegated to phone calls or emails. And then I received the sad call that she had passed away. Sharon loved the time she spent with our birds, and as a scientist she never failed to have questions about their care and behavior.

Sharon has bequeathed a generous legacy to REF. In tribute to her pursuit of solace in the company of our birds and the wild outdoors where she enjoyed birding and hiking, this page will feature videos on the eagle nests we’re monitoring along with a golden eagle research project we have joined in Wyoming. Many of the videos will be featured on our social media sites, but some of them will be found only here on Sharon’s page. Please visit often!  ~Peter Reshetniak, Founder

You can help support Sharon’s memory far into the future by donating to this page. Unless instructed by the donors, names will be listed on this page. Amounts will be kept anonymous.

Thank you very much for your support.

The most recent video will appear at the top of the page…enjoy! 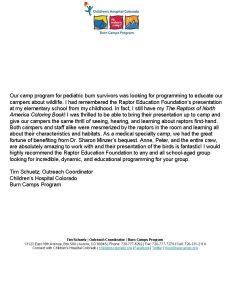 Peter had a chance to go back to the west nest at Barr Lake State Park on March 8th and he discovered it occupied with one of the parents “in situ” so to speak. Incubation was underway and when he returned on the 9th, despite driving snow flurries in the morning, the big bird was holding fast. Peter went back a second time in the afternoon when the flurries had slowed down. He watched the situation for a while, and then a reminder of the challenges this nest faces rolled by on the tracks. It’s going to be interesting to watch this particular nest, which is just two minutes from REF’s office!

Thanks to longtime REF member Laura Chapman, Peter was alerted to amorous activities of a bald eagle pair at the Star K Ranch. He was able to visit on February 16 and despite a serious blizzard he was able to record an eagle on the nest incubating. Look carefully through the wind-driven snow to see her holding fast.

Peter returned on subsequent days to capture more activities confirming that the pair have established an active nest. Assuming that there was at least one egg on Feb 16th and adding 35 days, we project that March 23 or 24 will be the hatching date of the first egg. The interesting thing about this nest is that on the west and north sides of the natural area and probably no more than 100 yards away, are several large industrial operations. Both sites are very active with large trucks, a cement factory and a substantial landscaping operation making quite a bit of noise in the area.

The Morrison Nature Center is on the east side of the nest, and the Star K Ranch is also protected as a natural area, which gives the eagles a somewhat “natural” buffer on that side. However, in ten days of observations, Peter has seen the eagles approaching from all directions to return to the nest. Once the eaglets are hatched and the amount of hunting increases, it will be interesting to see which directions the eagles fly towards and return from, and what type of prey is brought to the nest. This location seems to demonstrates that bald eagles can tolerate all types of human intrusions into their nesting territory.