Thanks for visiting and taking some time to meet the owls in our care.  We’re often asked what they eat. Their diet in captivity includes rats and mice. In the wild, depending on the species of owl, they may also eat snakes, prairie dogs, insects, other small animals, and road kill. If you would like to help us feed the owls, you can contribute by clicking the button near each owl’s description.  Or help us by adoption! 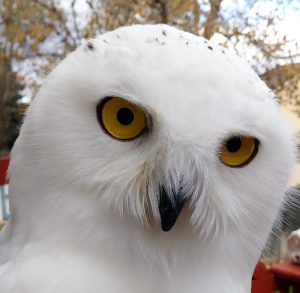 We are deeply saddened to announce that our snowy owl passed away on November 12th. During the fifty-five weeks that we were privileged to care for this remarkable raptor, we learned a tremendous amount about this enigmatic species. Docents, staff and the public were enchanted by his beauty, and his death has been especially frustrating because we took so many precautions to prevent it.

The necropsy performed less than 24 hours later revealed a massive infection of aspergillosis, nearly all of it in the posterior air sacs which lie in the belly area of a bird. This silent, deadly respiratory disease, caused by a fungus, strikes fear into the hearts of everyone who works with raptors. It is difficult to treat once a bird is infected, and often not possible to prevent. The chronic form of the disease, which our snowy had, can take months to develop, sometimes with absolutely no outward signs of illness. Certain species, such as gyrfalcons, goshawks, golden eagles and immature red-tailed hawks are notorious for their susceptibility, especially when they are under stress such as migration, transfer to a new facility, or newly-fledged from the nest. Understanding that he would experience a certain amount of stress in the transition from Indiana to our facility in Colorado, we took all the precautions we could, including a full blood and neurological work-up, and radiographs (x-rays) once he arrived.

Based on the medical findings, we put him on a couple of medicines for parasites, and without any signs of illness, in an overabundance of caution, we also treated him with Itraconazole for twenty-one days. This is the go-to drug for aspergillosis and captive raptors under stress are frequently treated with it, just in case. Over the summer, knowing how vulnerable Arctic species are to lower latitude mosquito-born illnesses, we also put him on a prophylactic regimen of Lariam, an anti-avian malaria drug. The avian form of this disease is known to kill raptors within 72 hours of the first symptom, and we did not want to risk missing anything. And of course, we vaccinated him and all of our birds for West Nile virus.

By the time we realized something was wrong, it was simply too late. His body was donated to the Denver Museum of Nature & Science for acceptance into their permanent collection. All we can do is attempt to learn from the time we cared for him, and perhaps do things differently in the future. As one of our consulting vets reminded us, control and prevention of every disease is impossible, and the overriding philosophy of, and intent of the special permits we hold from the U.S Fish & Wildlife Service, is to use raptors for education. They are not merely ornaments to decorate enclosures and not be seen by the public. While we work through our sadness, we are somewhat comforted by the knowledge that we truly fulfilled our educational mission through the numerous programs that he participated in. The faces of children and adults alike lit up when he entered a room; the audible gasps and sea of cell phones that materialized were something none of us will forget.

Most of all, we would like to thank each and every one of you who contributed to our “Support our Snowy” campaign which helped us acquire, house, and care for him. To all of you who visited our facility to meet him, signed up for a program, or showed up at an event, we are profoundly grateful for your enthusiasm and support.~Anne Price, Curator of Raptors.

Photo below by Marilyn Stevens 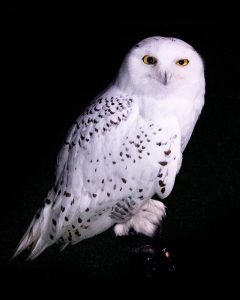 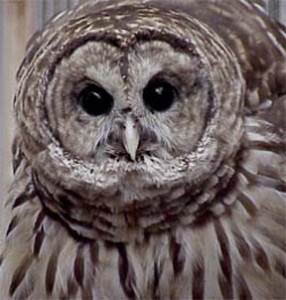 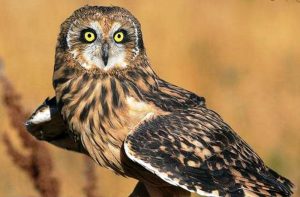 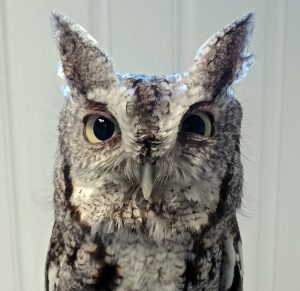 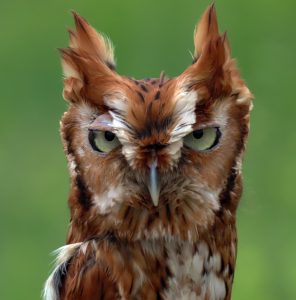 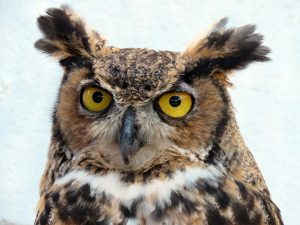