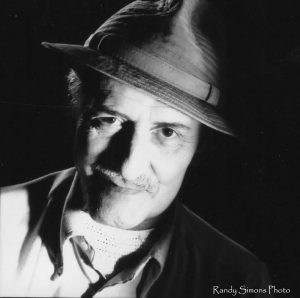 The Raptor Education Foundation is pleased to display the work of Donald L. Malick. Don (1929-1986) was known to his peers as one of the best bird artists of this era. His work was based on extensive field experience with the Denver Museum of Natural History, and the National Museum in Botswana. His raptor paintings capture the essence of these magnificent birds better than 98% of artists working today. He has been featured in Audubon Magazine, illustrated plates for the National Geographic Guide to North American Birds, and extensively illustrated the Birds of Colorado, published by the Denver Museum of Natural History.

You can see a sampling of the illustrations Don produced for our book here. This was his last large body of work. He produced over 50 paintings and the accompanying line drawings in a relatively short period of time while fighting cancer, which eventually took his life.  Most of the illustrations were produced without any photographic references, as is so typical of many wildlife painters today who merely copy photographs in a creative way. Simply put, Don knew his subjects. Only a few painters have matched his skills and knowledge. Roger Tory Peterson’s original forward, included in this revision, testifies to Don’s exceptional skills. We are pleased to ensure that his work will continue to influence future generations with this most recent edition of our book. Kudos to the University of New Mexico Press for expanding the reach of this book into the 21st century.

Below is a sampling of some of Don’s larger raptor paintings demonstrating his peerless abilities. 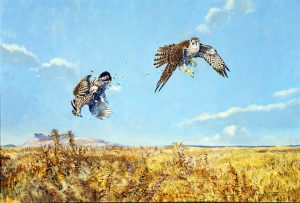 High Prairie
This Malick painting captures the Prairie Falcon, Falco mexicanus,  in an exquisite predatory moment. This image was used as illustration for the inside cover of Game Hawking at Its Very Best, by Hal Webster and James Enderson. 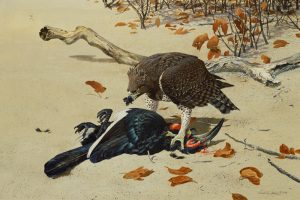 Martial Eagle on Ground Hornbill
This work features one of Africa’s great eagles, the Martial Eagle, Polemaetus bellicosus, preparing to dine on the formidable Ground Hornbill. Winner of Best of Show, 1980 Academy of Natural Sciences Invitational.

From Paul Richard, writing in The Washington Post: It is refreshing then to see Donald L. Malick’s eagle — with feathers in its beak and a hornbill, partly disembowled, impaled on its talons. Robert Bateman’s handsome “Gentoo Penguins and Whale Bones” is comparably instructive. These two works remind us that birds do defecate and kill. 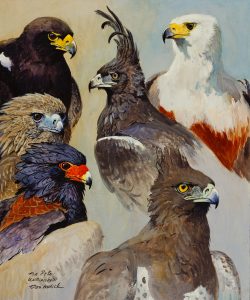 The Africans
This print of Don’s study of African eagle portraits was to be the first in a series of paintings featuring African eagles. Although signed as “unfinished”, it illustrates Don’s superb ability with brush “drawing”. Original in a private collection. 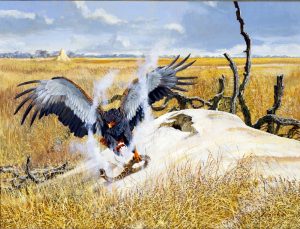 The classic snake eagle, a Bateleur, going after a puff adder. 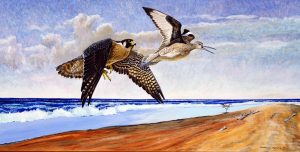 Peregrine falcons were one of Don’s favorites.  This painting depicts one in hot pursuit on the eastern shore.  Don created the original ink drawing for REF’s logo featuring a stooping peregrine. 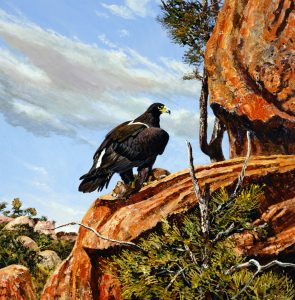 African eagles were Don’s favorites.  He spent months in the field drawing and painting many of them while working for the National Museum in Gaberone, Botswana, and for the Denver Museum of Natural History as it was called in the old days. 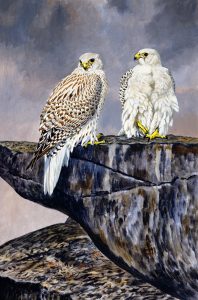 White Gyrs
This painting was used as the dust cover illustration of Game Hawking at Its Very Best, by Hal Webster and James Enderson.