If you received a letter from the Colorado DMV…

July 25, 2006: Deadline for responding to the terms of your letter.  We are not able to provide any assistance to anyone who has not complied by the deadline stipulated in the letter you received from DMV.

April 29, 2006: Several hundred Colorado residents have received a letter from the Colorado Department of Motor Vehicles (DMV) stating that their vehicle registrations will become invalid if they have the Colorado Respects Wildlife license plates on their vehicles, and they are not qualified as members of  the Raptor Education Foundation (REF).  Our office has been receiving dozens of calls about this letter, and we are working overtime to deal with this unfortunate issue.

Here’s what the letter did not tell you: Our audit of the DMV records was triggered by an order from the court related to a law suit we had to bring against the DMV back in 2000. The court action was taken because one incompetent director at DMV breached  the specialty plate contract with REF, and DMV clerks began issuing our license plates to anyone who requested them.  All you had to do was pay the county a one time fee of either $35 or the $25 which is the current Specialty Plate charge.   None of this would have happened had that  incompetent employee acted rationally. This type of incompetence corrupts the entire governmental process costing tax payers billions and billions of dollars. Governor Owens issued a written letter of apology about this matter.

After almost 5 years of litigation (we won with a unanimous Appellate Court decision affirmed by the Supreme Court). Despite the fact that the State spent ten’s of thousands of your tax dollars defending this incompetent person, and almost forced us out of business (we lost $150,000), the damages settlement was finalized as an order of the court and vindicated our assertion that the DMV acted illegally to begin with.  Part of that settlement provided for REF to audit the DMV, to ensure they were administering the program accurately. They were not, and this is how your name turned up in that audit and why you received the letter.

This was not your fault, and we know many of you are angry and confused about the letter. Many of you have told us, you feel like a gun is being held to your head. We understand your frustration, and hope this page will provide some more information to help you with your decision. Read what one of you wrote to the DMV.

If you elect not to become members of REF please be advised that you should request the County refund the one time fee of $25 you paid to them when they issued our plates to you illegally.  Many of you were led to believe a portion of that $25 would come to us.  None of the $25 came to us.  Just like the Columbine plates issued to people, none of the $25 paid to the county goes to any aspect of the Columbine tragedy. Those payments are allegedly directed to the Highway Users Trust Fund.

To soften this burden on you, REF has dropped its 6 month membership to $50, and our Annual membership to $75. Also, as with our other memberships which include the Colorado Respects Wildlife license plate as a membership premium, you do not have to pay each year.  You only have to join once and the plates are yours until they wear out. They may also be transferred from vehicle to vehicle.

In some cases we have already discovered that some of the names on that list are qualified members whose names have changed due to marriage or divorce. In some cases your vehicle was registered in the name of another household member and not in the name of  our Voucher holder. We can check your status quickly and if you appear on that list by mistake, we will notify the DMV electronically, and you will not have to take any other action.

Thank you for reviewing this information, please call us at 303-680-8500 to pursue these issues further. We apologize if we cannot get to your call immediately, we are swamped with calls.

Our license plate program was the first and still is the only plate program  in Colorado with a benefit to the environment and wildlife.  It was designed and created by REF to further our environmental education and research programs and goals.  The people with these plates on their vehicles remind everyone that wildlife also deserves respect.  We apologize to those of you caught up in this matter, you were acting in good faith and also deserve respect. We encourage you to write to Governor Owens about this matter at: 136 State Capitol Building, Denver, CO  80203.  Peter Reshetniak, President

DMV officials using  “bureaucratese” try and blame their incompetence on the public, but they are astutely caught by one of their poorly served customers.  Mr. Ikenouye did not draft the letter Dr. Gilmour refers to.  That creative act should be credited to the head of the department, Maren Rubino, Director of Operations, Titles and Registrations. 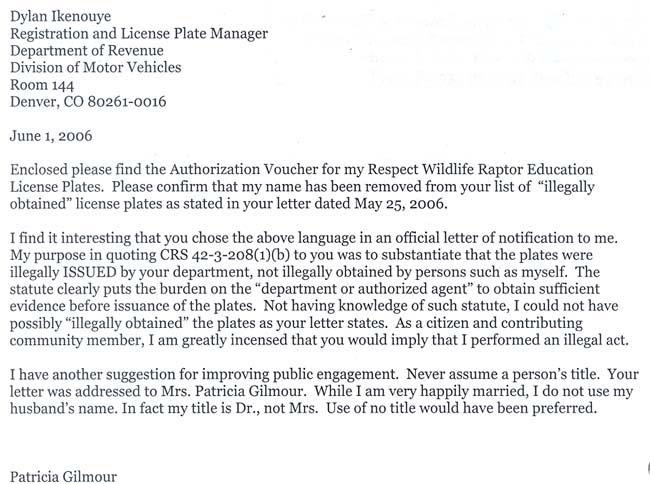 Thanks to Dr. Gilmour for allowing us to print her incisive letter.